Syakirah's start at Touchtribe: Ten moments from the first weeks as a front-end developer

Since September, Syakirah has been biking around on her VanMoof bike, to the Touchtribe office in Amsterdam to get started as a front-end developer. Although she had to get used to how loud the bell was and it didn't go unnoticed when she arrived at the building. The puns 'Syakirah Syakirah' and 'Hips don't lie' were soon made, but luckily she doesn't become 'Waka Waka' anymore ;). How did she experienced her first weeks? You can read it in this blog.

Atmosphere within the front-end team

"Actually quite fun," Syakirah laughs when answering the question. "I notice that, now that it's finally possible again, there's a drink for every occasion." At Touchtribe, they don't just do DiMiBos, the Tuesday afternoon drinks, they also organize activities like karaoke on Fridays and Mario Karting during lunch breaks. "In this way I got to know my colleagues quite quickly and I was also allowed to join the party committee in consultation with Linda, the other woman on the men's team. What I like about this team is that I was very well received and that there is no distinction at all between men and women. I really missed being with colleagues and working together."

"I had to get used to the full-time work week in the beginning and the fact that there is a light-hearted work atmosphere where there is also time and space for sociability helps with that." With the front-end developers at Touchtribe it is certainly not boring. "We might be coding all day, but we can also be pretty funny. For example, one of the first things I was told in the first week was that if I forget to 'lock' my screen, I have to treat cake." For security, it is very important that nothing can happen to the data when you are away from your desk, so your screen is always on sleep mode. "At the DiMiBo, a colleague had forgotten this, so in my first few weeks I was already treated to apple pie." 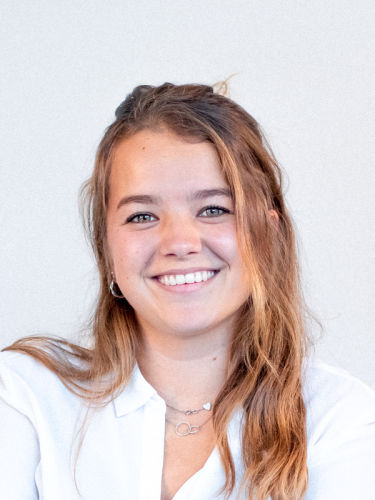 A serious work atmosphere where there is time and space for socializing.

Staying fit at the office

"We eat a lot at the office, from the Salmiak lollipops at Puck the office manager's house to the healthy lunches we get every day and the (vegan) pizza at the get-togethers. Yes vegan pizza, even that is provided at the office. Furthermore, there is a snack corner at both buildings where you can grab snacks and drinks throughout the day. Delicious. Luckily I have my bike to keep in shape a bit." What her favorite office snack is? "The seaweed chips!"

The most exciting moment for me, was my first code review.

Yet it wasn't all party during the first few weeks and serious things had to happen too. "The most exciting moment was my first code review. This is kind of a test moment whether the work is done well. Fortunately, this went well and they were satisfied with my code. This is my first real permanent job, so I had to get used to not only the bell on my bike, but also the busy schedule. At Touchtribe they are very flexible and often I can decide whether to come to the office or work from home."
In short Syakirah gets her hips spinning at the DiMiBo, gets all happy with the snacks and is having a great time as a front-end developer at Touchtribe.

Does this team spirit sound like music to your ears? Then check out our vacancies on the website: www.werkenbij.touchtribe.nl

Is your organization ready for a headless solution?

Email us
Call us

Are you a developer and do you share our view on technology?